Minerva has its PLM roots in the SMB-sphere

First of all, I want to thank Oleg Shilovitsky for his comments on the recent press release on Aras and Minerva Group Announce Strategic Partnership for a Best Practice Industry PLM Solution.

In his blog, he questions whether Aras Innovator can be scaled down for smaller and medium-sized manufacturers and if Minerva can do it. Specifically, he states that: “Minerva made ~100 Aras implementations and feels strong to bring it to smaller companies.”

I would like to bring attention to the fact that while Minerva Group has worked with large customers, including Airbus, BAE, Saab, Dräger and many more, the majority of the 100+ implementations we have done with Aras Innovator have been done successfully at smaller and medium-sized manufacturing companies with 250 seats/users or less.

In addition to our significant experience with the Aras Innovator platform, Minerva Group has worked with PLM, ERP, and CAD integration systems for 25 years, mainly operating in the SMB market. For quite a few years, we have been working with Agile 9 and in particular  Agile Advantage, a solution specifically targeted towards SMB manufacturers. Our expertise within implementing enterprise software solutions was founded during these years. In 2008, we became a reseller and implementation partner for Aras Corporation, bringing our vast experience with SMB’s to the Aras Innovator platform.

The third point I would like to highlight as the reason for our success is the fact that in 2015 developed two industry solution templates on top of the Aras Innovator platform, aimed specifically towards the Electronic & High-Tech and the Medical Device industries. Since the introduction of these templates, we have seen high adoption rates amongst existing and new customers and received positive feedback as well. Our industry solutions have proven themselves to be working in the field, and not just on PowerPoint slides. Following the latest significant expansion of the two solutions, we have decided to launch this as one complete PLM solution, called Minerva PLM.

”Minerva has a couple of nice solutions and ideas that will high-likely blend in well into the Innovator platform. Big Tiers addressed by Aras often work on highly-modified derivations of the core product and may have specialized software for the tasks addressed by the add-ons. Aras will not focus on improving applications that are not relevant to their target audience. But this additional software content is of high interest for SMBs, as they can help to save money for additional software.  If Minerva succeeds in improving the add-ons, they will have one big pro argument for their solution.” 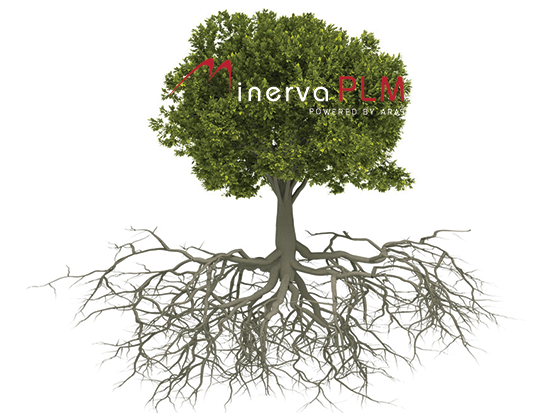 While I appreciate Oleg Shilovitsky’s insights into what he believes SMB manufacturers need and what our colleagues in the PLM industry have tried to do with a specific offering towards SMB’s in the past, I believe his comparison with our Minerva PLM offering is off-target. Without tooting our own horn too much, Minerva Group has a proven track record implementing Aras Innovator PLM successfully at companies in the SMB space.

I would like to invite Oleg to a discussion on what SMB manufacturers really need in a PLM solution.

Lastly, the question: Will Aras scale down to SMB? To me, the answer is a simple yes. Because that is what we have been doing with our industry solutions since 2015.

Looking forward to continuing the work with defining the best solutions for the SMB market.

Leon has worked with multiple IT systems from ERP to BI and PLM. His experience ranges all the way from programming to business consulting, project management and business development. Leon started his career in IT development and has further earned a diploma in IT and Economics at Copenhagen Business School and an Executive MBA at Henley Management College.